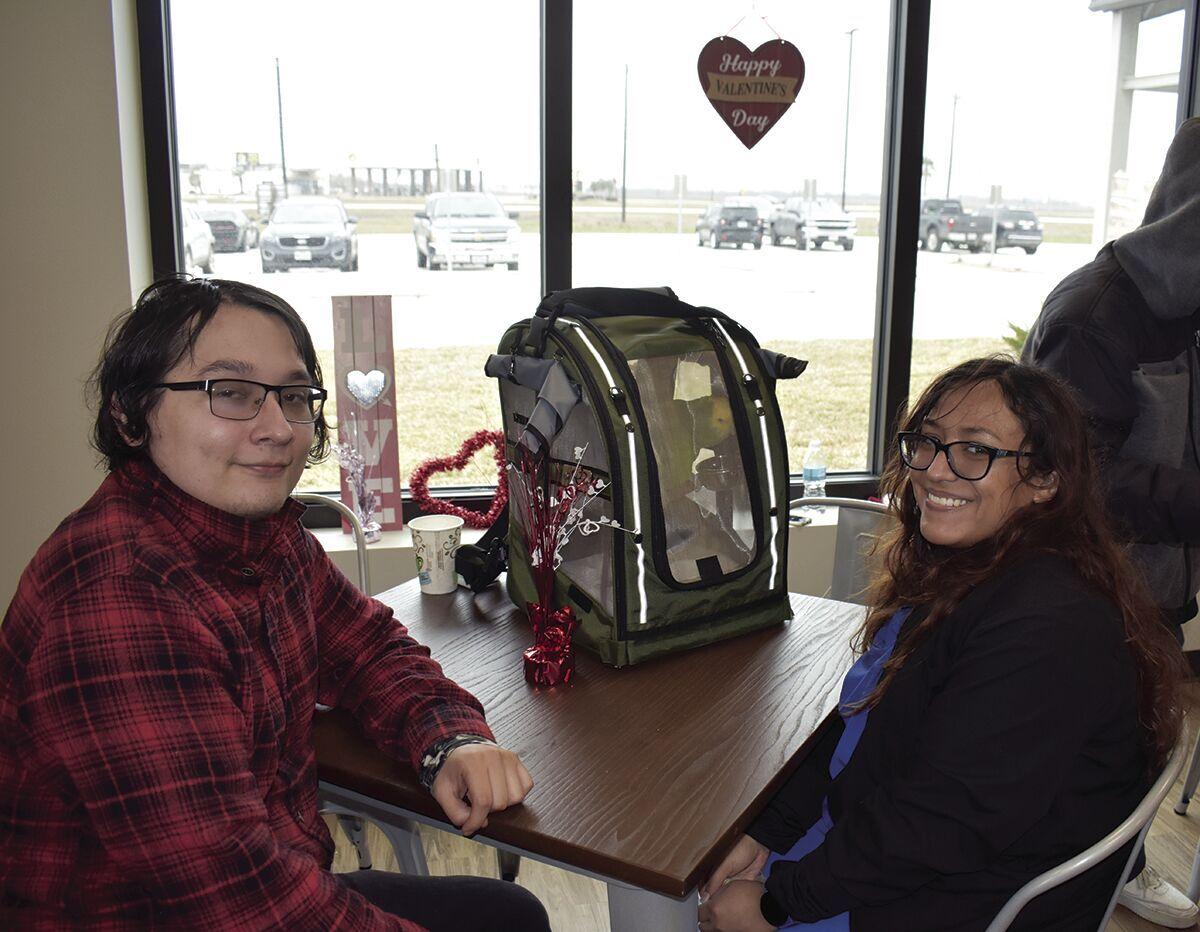 Joshua Torres and Deanna Garcia enjoy the warmth with their bird at Parkway Church. The church opened as a warming center Tuesday to help residents stay as warm as possible during the arctic storm that blew in Sunday. 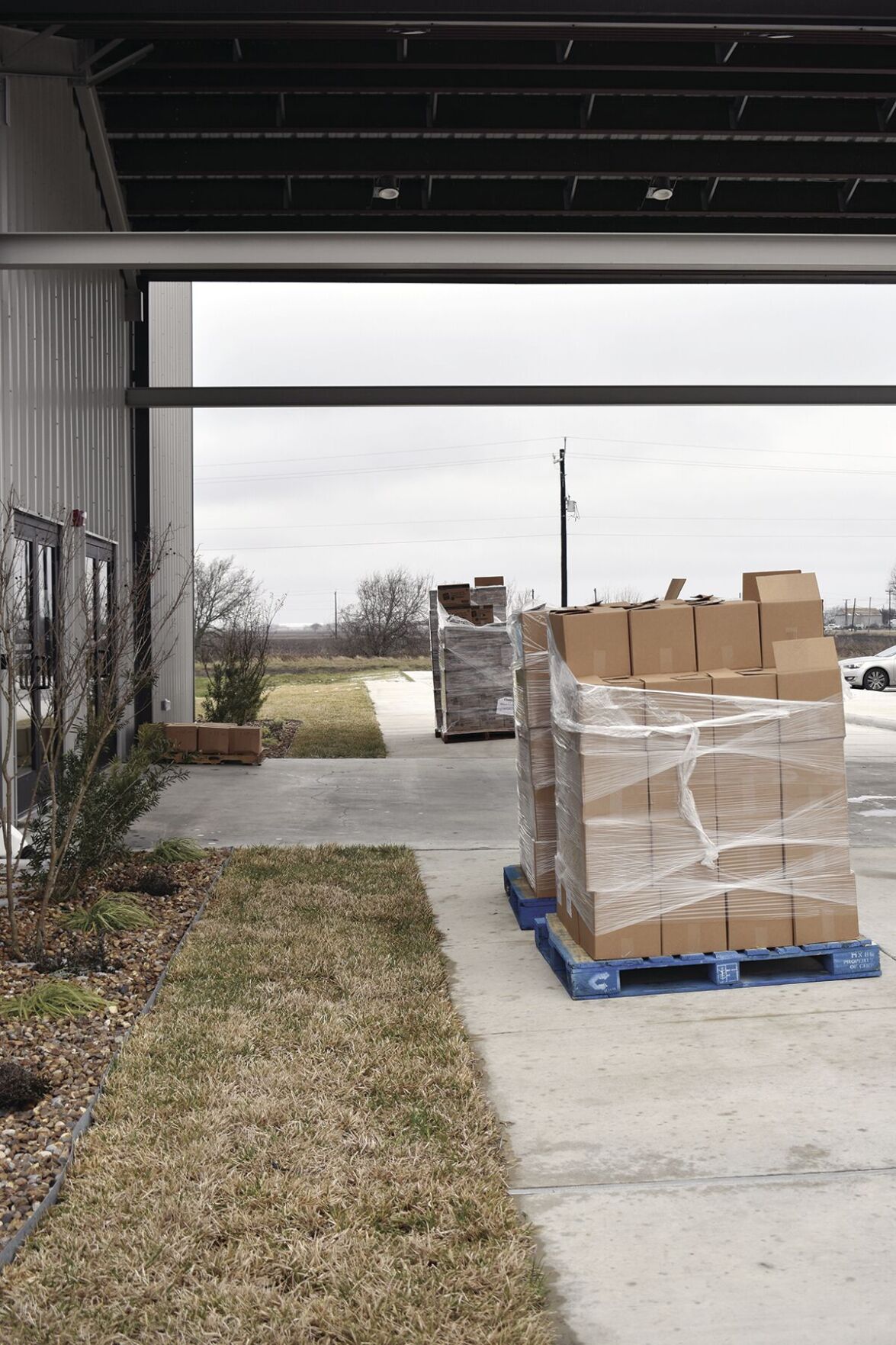 Stacks of food boxes stand outside Parkway Church. The church opened as a warming center and offered hot food and drinks to a cold community.

Joshua Torres and Deanna Garcia enjoy the warmth with their bird at Parkway Church. The church opened as a warming center Tuesday to help residents stay as warm as possible during the arctic storm that blew in Sunday.

Stacks of food boxes stand outside Parkway Church. The church opened as a warming center and offered hot food and drinks to a cold community.

That’s how Leonard Harvey, who had been without power for since Monday, described the warming station at Parkway Church.

The church is on State Highway 35, across from Buc-ee’s, and offers hot food and drink, a place to charge your phone and a place to lay your head.

“It’s been amazing. It’s a great feeling to be able to provide for others and help where we can,” said Parkway member Amanda Martinez.

The church’s lobby had couches where people rested while charging their phones.

Tables were set up in a food court area where church members served food and drinks to residents who came in to warm up from temperatures that dropped into the high teens.

“As long as the community needs, we will be open,” said Parkway Deacon Roland Cantu. “

The church as been open since Nov. 19, 2020, and “we are grateful to have a church home,” said Parkway Port Lavaca Campus Pastor Sam Flores. Located at 2400 State Highway 35 S, the church has changed locations several times – the Bauer Community Center until Hurricane Harvey damaged it, to the Safety Council and then at Grace Funeral Home before finally coming home to their own building. Services are 9:30 a.m. and 11 a.m. each Sunday

The warm open doors began with an idea that snowballed into food service, said Flores.

“We saw we had electricity and were warm, so we thought about getting the word out so people could come in and warm up,” he said. “Then folks in the church got together about cooking what food they had and offering that. It then stretched to staying overnight. It grew incrementally but we just rolled with it.”

Deanna Garcia and Joshua Torres had been spending time in their car to keep warm after losing power and water.

Garcia said worries for their bird’s health in the extreme colds brought them to Parkway.

“We’re so happy to be somewhere warm,” said Garcia.

In addition, the Food Bank of the Golden Crescent was conducting a food distribution at the fairgrounds and Amy Jordan with the Calhoun County Community Ministries and Food Bank, asked if the church could be a distribution site as she was concerned people couldn’t make it to the fairgrounds in the weather, said Flores.

“It was gone in half an hour. It didn’t last long,” he said.

Parkway Church’s motto is “Building Relationships That Build Disciples” and stepping up during the extreme cold weather has helped to build relationships.

“We saw a need and wanted to fill it. It is a natural by-product of our peace with God,” said Flores.

Alamo Heights Baptist Church offered help with lunches and dinners and “we said please,” said Flores. He also noted that Bayside Church in Olivia was well prepared as they had generators and food for keeping folks warm in the evening.

“A big shout to them and others in the community. It gave us reassurance that if we lost electricity, we had somewhere to redirect people instead of having to send them back into the cold,” said Flores. “It was cool to see the whole community working.”

And, the warming station has provided data that will help Parkway Church in the future when another catastrophe strikes.

Jennifer Hranicky and her family were walking into the church as the water at their home had been turned off, but electricity had just returned.

She was hoping to find milk, which had been delivered to the church, as her husband had been all over and been unable to find any for their 5-year-old son.