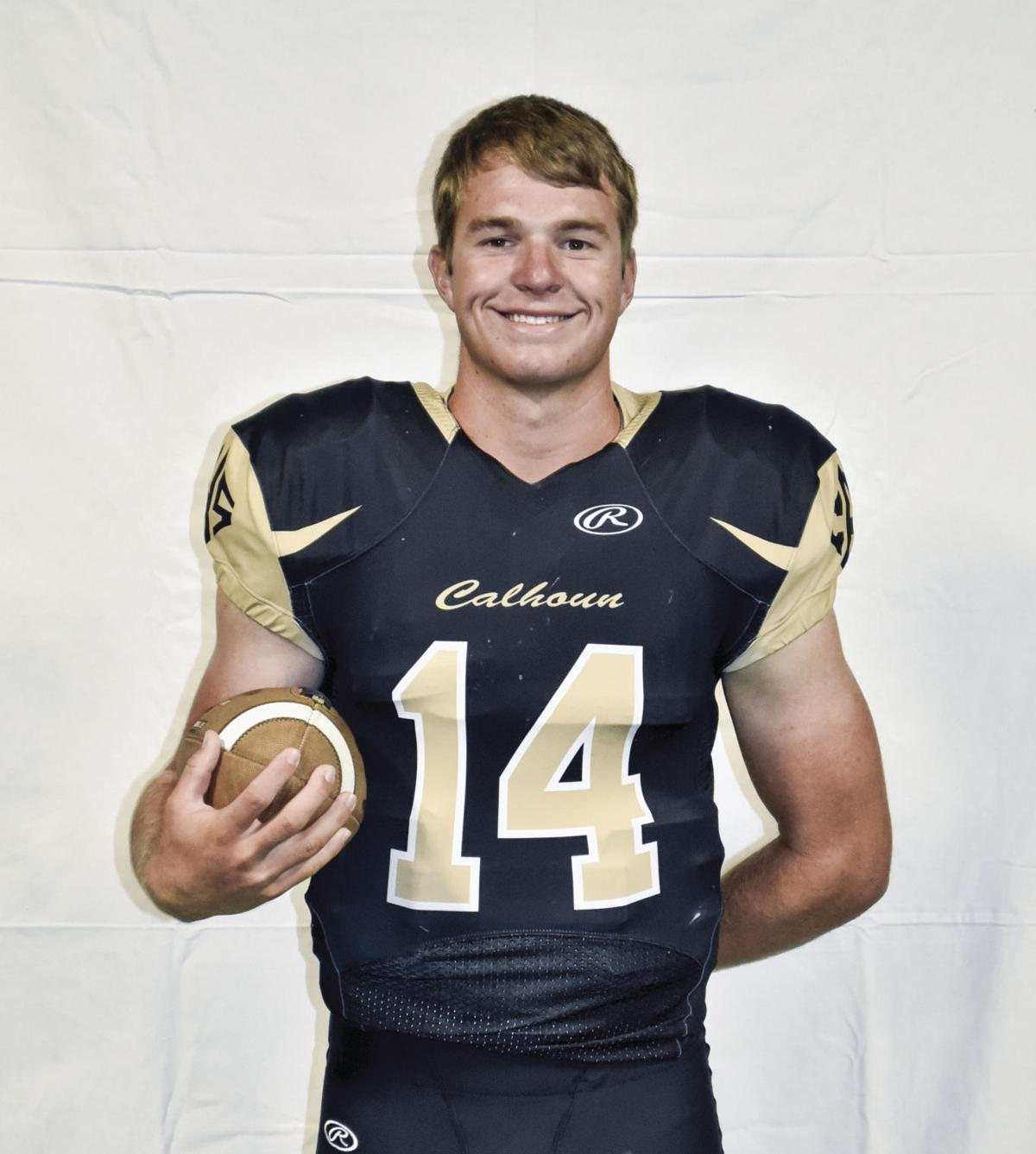 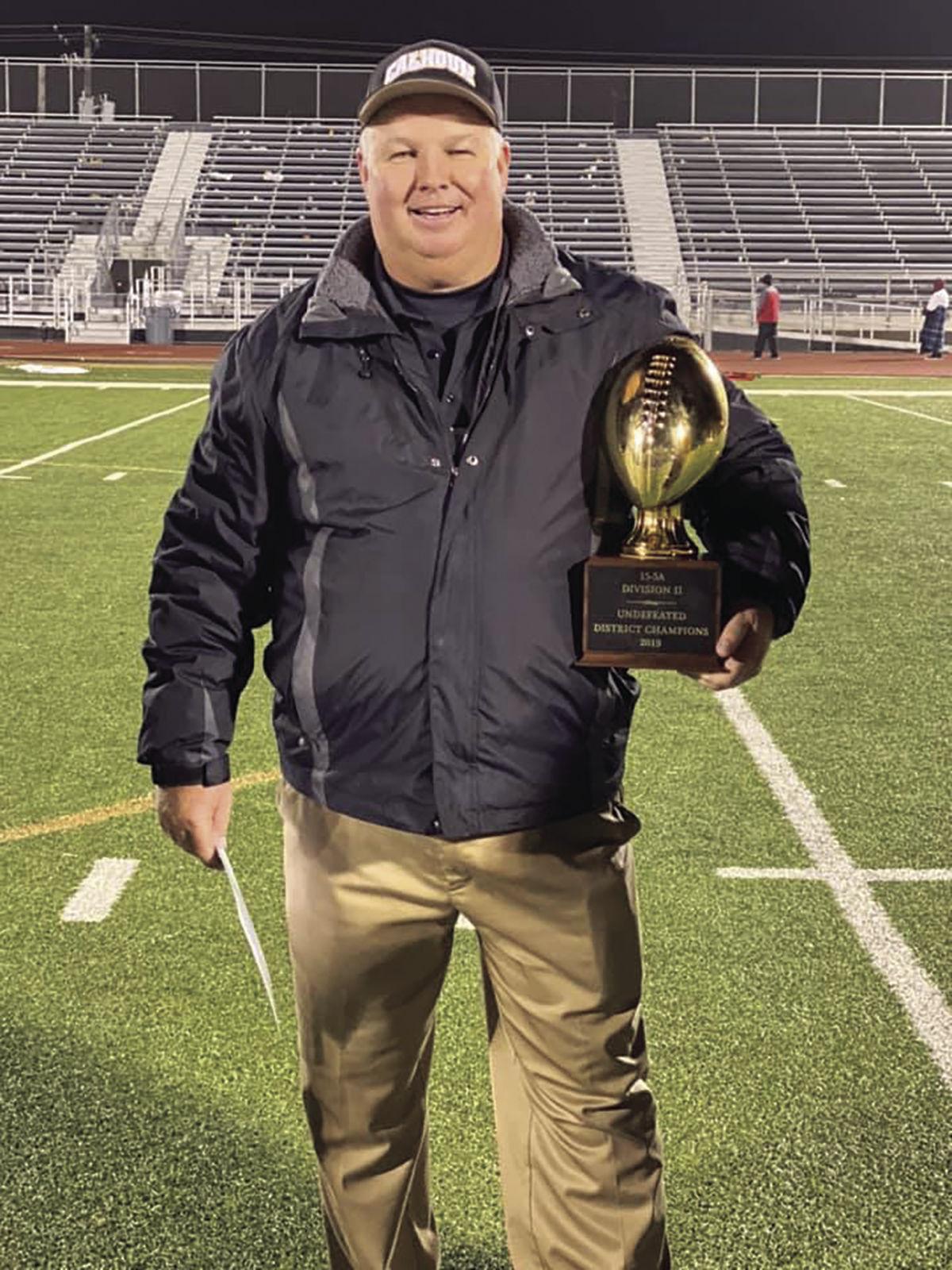 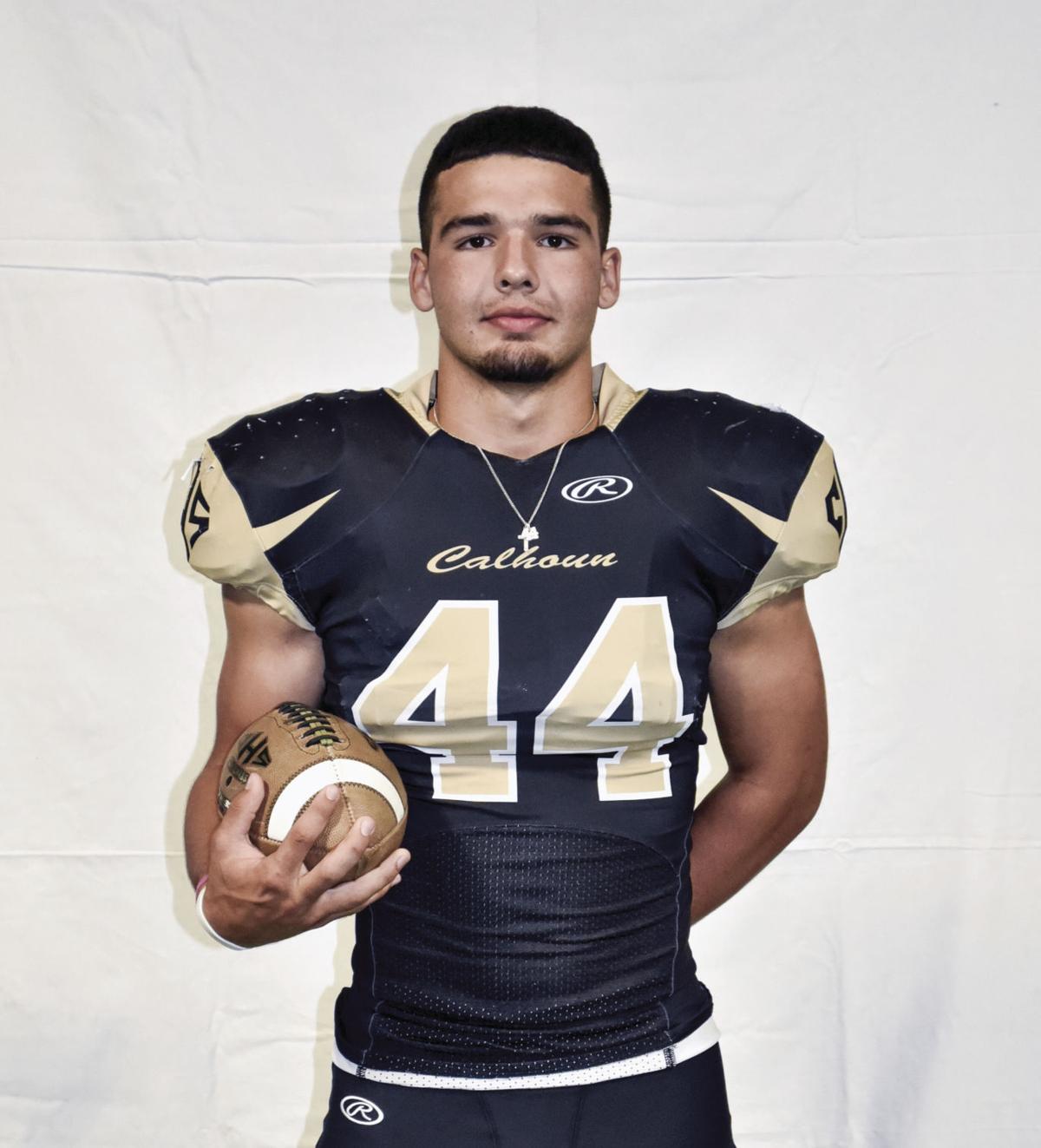 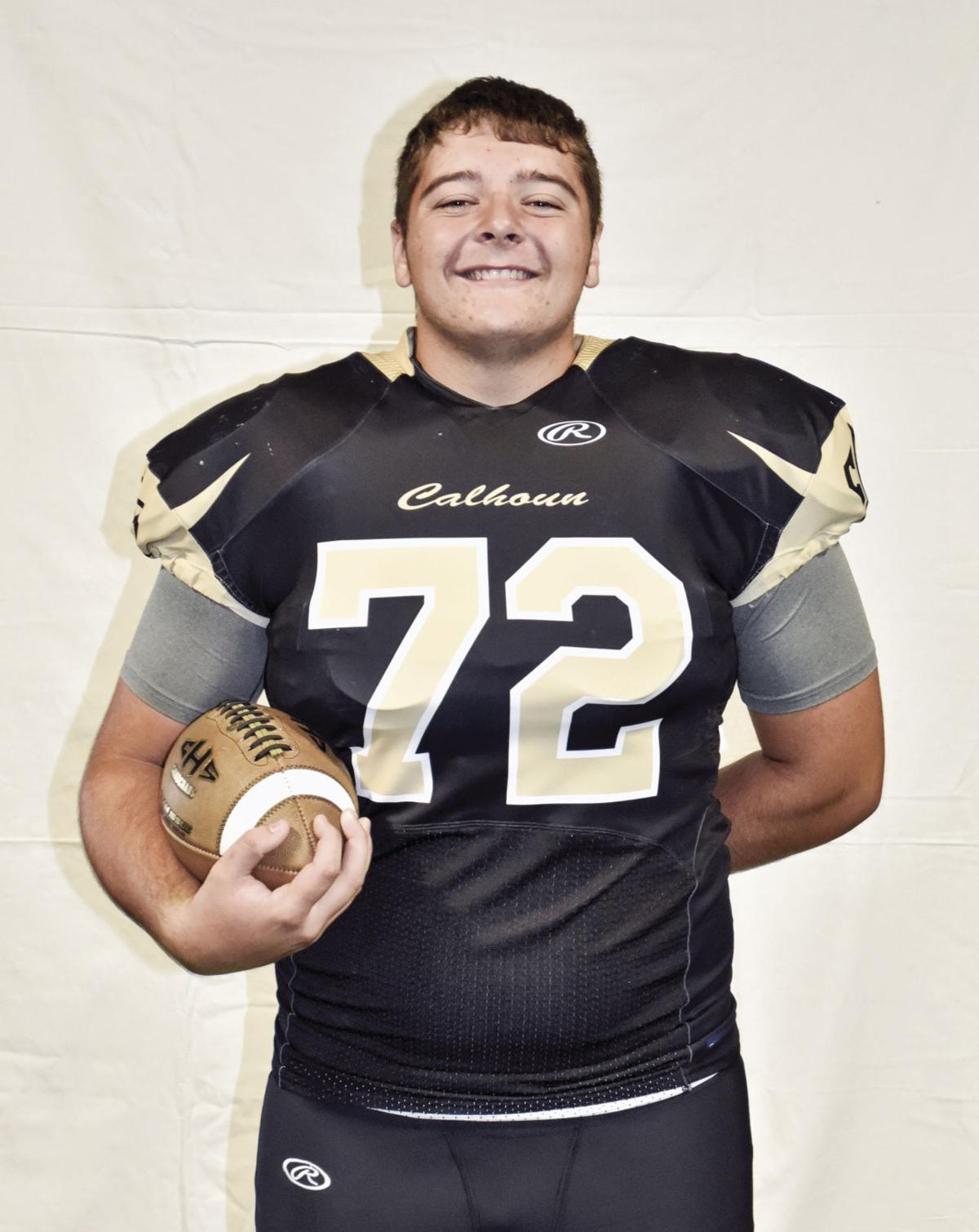 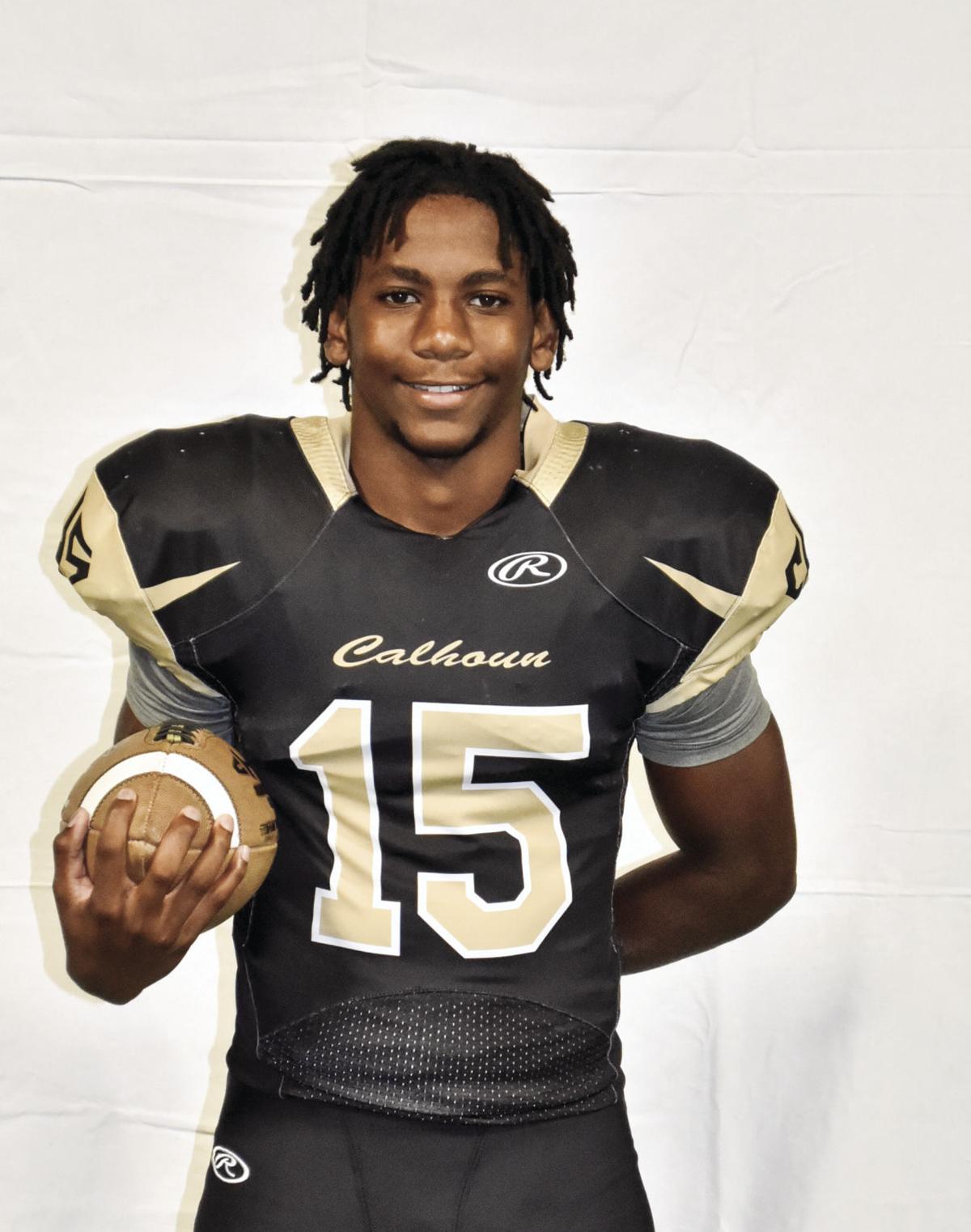 The Calhoun Sandcrabs Varsity Football team took home top prizes with the announcement of the 5A District 15 All-District team.

Whitaker spoke about his players receiving these top honors, and he said it’s always exciting for his players to be recognized.

“It’s great for them to be recognized by the other coaches in the district, you know, we can’t vote on our kids, all we can do is nominate,” Whitaker said.

He added he told his players that it’s an honor to have “everyone” in district vote for them and recognize that they are the best players in the district. Kestler rushed for 1453 yards, threw for 413 yards passing, and scored a total of 34 touchdowns in 12 games.

Kestler said it felt incredible, and he added all the hard work in the offseason and practices he put in every year all came together.

From his defense giving the ball back to the offense, to his O-Line blocking for him, Kestler gave credit to his teammates for helping him get to this point.

“Having four new linemen come in, and I think four of them got first-team all-district, and Caleb [Harrington] got Lineman of the Year,” Kestler said. “He was the leader of that line and helped them all get prepared for this season, and they did a great job.”

Kestler thanked his family, his coaches, and his teammates for “helping him along the way” to get this point.

Harrington talked about receiving Lineman of the Year for 5A District 15, and he said it felt remarkable, and he worked “really hard” to earn this honor.

“I try at every single practice, just grind for it was the goal I was going to go for,” Harrington said. “And I just kept beating the defensive man every single game, and I just got there eventually.”

Offensive Line Coach Roger Saenz said he is proud of all five guys, and he and all the coaches believe that “competition breeds success.”

“These guys push each other, and they pushed each other so hard that one of them was able to separate himself,” Saenz said.

Saenz added Harrington’s dominating and physical play helped himself earn this “prestigious” honor, and he is “extremely proud” of him.

“I want to thank my entire line being with me and giving me support over the year and not letting me down,” Harrington said. “Always giving me encouragement and being there whenever I needed them the most.”

“If I pin someone, and they are going for another touchdown or a big pass, it’s one of the best feelings an offensive lineman can ask for,” Harrington said.

Kestler and Harrington graduate in 2020, and Whitaker told Kestler there’s nothing better than being named MVP of the district, and winning the award unanimously is an accomplishment that he can be proud of. He added Harrington was a dominating force of the offensive line.

“I know Conner is going to play baseball, and hopefully, Caleb can take what we’ve told him and take it to the next level and play football at the next level,” Whitaker said.

Johnson recorded his second 2000-plus yard season in a row and scored 29 touchdowns, earning him Offensive Player of the Year honors.

Johnson talked about achieving this award.

“It’s an amazing feeling, you know, the whole year. Coach Whitaker told us if you want to do something, you do it now,” Johnson said. “Our goal was to just keep winning and keep achieving, and at the end of the season, it would all pay off.”

Johnson gave credit to his O-Line and Coach Saenz for doing an amazing job this season, and he added they enabled him to do his best.

Johnson will be a returning starter on offense and is looking forward to a deeper run next year after this season ended in the Area Playoffs.

“It was a big impact on what we have to do next year,” Johnson said. “Like they [his coaches] always say, it doesn’t matter how you make the playoffs, it’s what you do in there.”

Johnson added his team didn’t do much in the playoffs, and it’ll be a “big inspiration” next season to compete to the best of their abilities.

Another returning starter Stewart took home Utility Player of the Year for his performance on offense, defense, and special teams.

On defense, Stewart recorded six interceptions and 62 yards in returns, defended 11 passes and forced one fumble. On special teams, he recorded 373 yards on kickoff returns and 50 on punt returns. On offense, he recorded 779 yards rushing, 187 receiving and scored nine touchdowns.

Stewart said it felt great to get this award, but he added he and his team are starting over and getting ready for next year.

Defensive Coordinator Cory McFall talked about Stewart and how “dependable” he is on both sides of the ball and special teams.

“It’s very refreshing to have a young man that not only can play both sides of the ball and special teams, but he wants to,” McFall said. “He’s got the heart for it, he’s got the stamina and the will.”

McFall added it’s “very rare” for somebody to go both ways and do it at a high level and, he said, “it’s advantageous to the whole football team.”

Stewart will be a senior next year and one of the many leaders of the team, and McFall said he has already proven that he is a leader.

“He’s proven enough to me already; he doesn’t have to do much more in my eyes…I have no doubt that will lead by example and be a great example for the younger kids to follow.” McFall said.

Whitaker talked about his returning starters, Johnson and Stewart, and how they need to stand up and be leaders.

“This year Cade [Kveton], Conner [Kestler], and those were the leaders of the football team, now it becomes Steve and Jaruis’s team,” Whitaker said.

Whitaker added the young players will be looking up to Johnson and Stewart for “leadership” and somebody to show them the way.

Lastly, Whitaker was named unanimous Coach of the Year, from dealing with the forfeit game to winning the district over Calallen, and he said he couldn’t do it without the people around him.

“The coaches that I have on my staff did an outstanding job this year preparing our kids,” Whitaker said. “And without the success of the team and these guys preparing them, those accolades don’t come my way.”

Whitaker added he is proud of his team and his coaches, and he told his coaches that this was a team effort and not an individual effort.