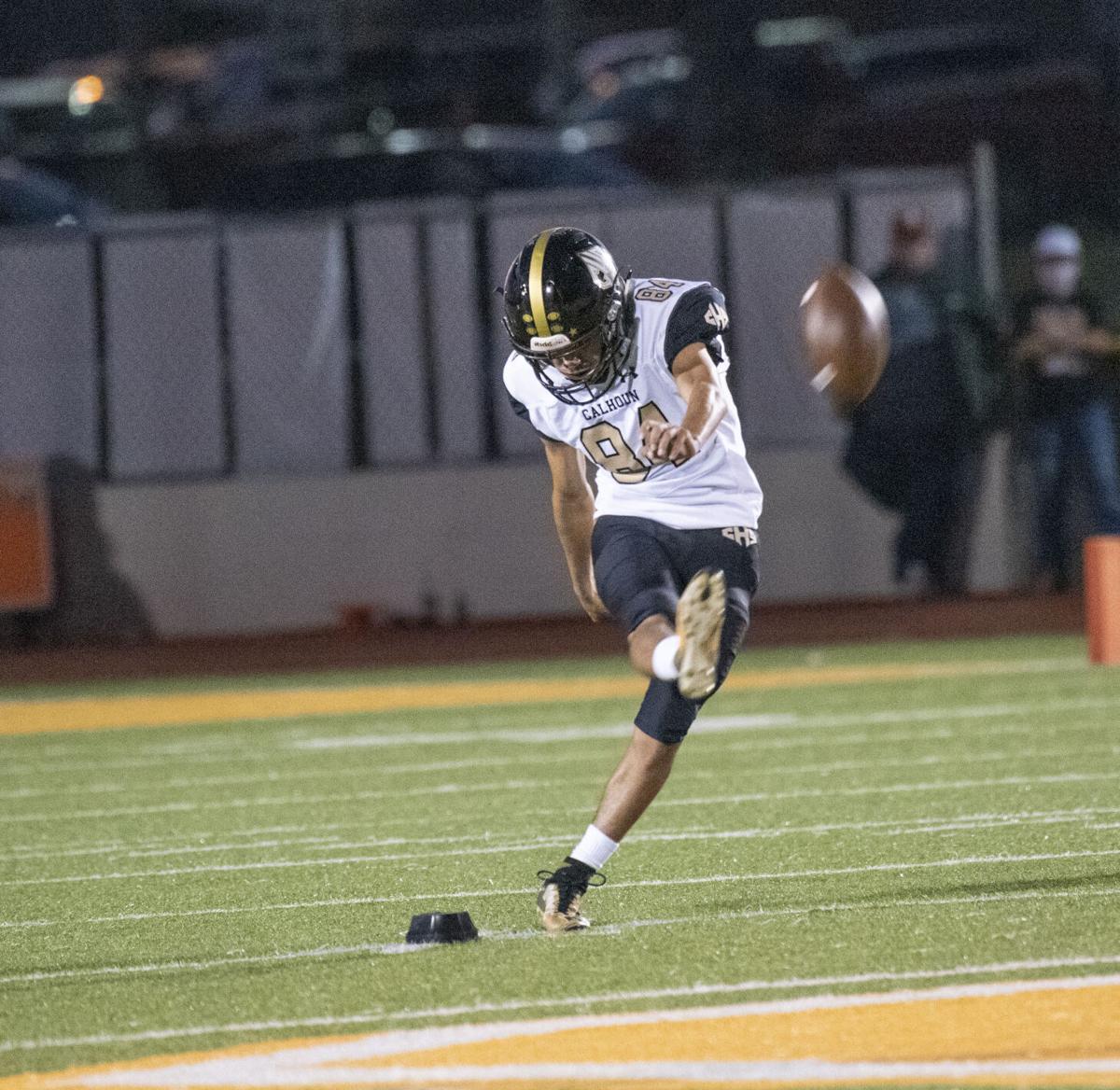 Place Kicker Jose Ledezma kicks off for the Sandcrabs in Beeville. Ledezma was named Special Teams MVP for his three touchbacks and going 7/7 in extra points. (Photo by Kellie Whitaker) 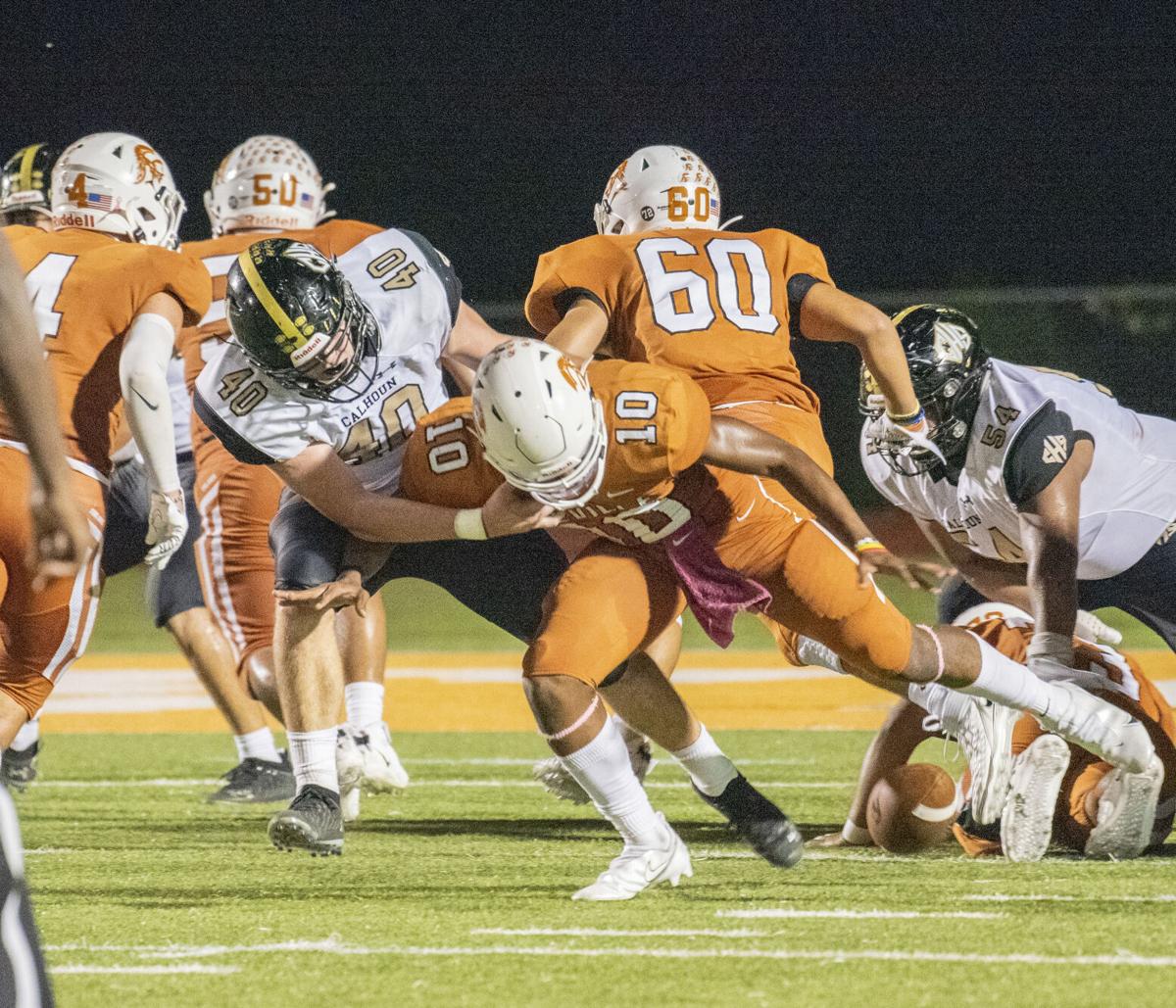 Linebacker Kirk Stringham forcing a fumble from Beeville’s quarterback last Friday. Stringham was named Defensive MVP in the win against the Trojans. (Photo by Kellie Whitaker)

Place Kicker Jose Ledezma kicks off for the Sandcrabs in Beeville. Ledezma was named Special Teams MVP for his three touchbacks and going 7/7 in extra points. (Photo by Kellie Whitaker)

Linebacker Kirk Stringham forcing a fumble from Beeville’s quarterback last Friday. Stringham was named Defensive MVP in the win against the Trojans. (Photo by Kellie Whitaker)

The Calhoun Sandcrabs (5-1, 1-0) opened up district play with a bang in Beeville with a 56-35 win over the Trojans last Friday night.

The Sandcrabs and Trojans were locked into a back-and-forth shootout throughout the first half with the Sandcrabs taking the lead at 28-21 to end the half.

“Beeville is a great football team; they’ve got some great coaches,” Whitaker said. “Coach [Chris] Soza is a legend coach in South Texas, and he runs a great offense.”

Whitaker complimented the Beeville quarterback’s performance against Calhoun, and he said he had the game of his life, and Whitaker added in some games he missed a couple of passes but was spot on during the game.

“They had our kids ready to play. We had to face severe adversity the last couple of weeks,” Whitaker said. “We had some kids out and missed practice for various reasons, and I’m just proud of our kids of hanging in there.”

The Calhoun Defense shined in the second half, only allowing two touchdowns and Junior Linebacker Kirk Stringham forcing a fumble recovered by Senior Defense Back Colin Carabajal late in the third quarter.

Carabajal talked about the crucial turnover.

“Whenever I picked it up, I just looked up and saw an open field, but I think I got too excited and tripped up on my feet,” Carabajal said.

Carabajal talked about the defense stepping up in the second half, and he said they had the same mindset and came out as a team and stopped Beeville from scoring again.

Whitaker talked about his defense stepping up in the second half, and he said his team really picked it up after halftime.

“They executed well. This is a really tough offense like I said. We had some adversity the last couple of weeks with some kids not in practice for various reasons,” Whitaker said. “It’s tough, not getting live-action to see this offense and trying to face it on the field.”

Whitaker added, in the second half, his defense was picking up and making some plays.

Calhoun’s offense rushed for 571 yards and scored eight touchdowns against the Trojans.

Johnson talked about starting 1-0 in district play and mentally preparing for this matchup.

“After every game, we celebrate Friday, and Saturday morning we get right back at it,” Johnson said. “We got two weeks to prepare for this game, and we made the most of it.”

Johnson said it feels good to start 1-0 in district play, but he added they’re going to celebrate this win and focus on being 1-0 next week.

Senior Quarterback Jarius Stewart rushed for 154 yards on 11 carries and scored three touchdowns, and he talked about how he will prepare for another challenge against Tuloso-Midway.

“We’re going to enjoy this win today and just go back to work tomorrow,” Stewart said. “Just focusing on TM and watch film and look at what we did badly, fix whatever it is.”

The Sandcrabs hit the road to Corpus Christi this Friday to take on the Tuloso-Midway Warriors.

Defensive MVPs of the Week: Stringham